Home baking and cooking trends are pushing up kitchen spend 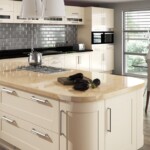 Kitchen industry sources have stated that the average value of British kitchens has doubled in 3 years. This is according to data submitted a few days ago by insurance provider NFU Mutual, obtained from the company’s insurance claims for fire damage caused by kitchen equipment.

Home cooking and baking are said to be a major contributing factor, with retail analysts revealing a rising trend in the popularity for these activities in the home. A spokesman for NFU Mutual said:

‘What we’re seeing from our data is a sharp increase in the value of people’s kitchens and the items they have in it, while the number of claims is actually dropping.

‘We’ve seen a lot more claims for high-end range cookers and brands such as AGA, as the trend towards home cooking and baking sees our clients invest more in their kitchens than ever before.’

NFU are imploring home owners to check their insurance cover, making sure that their kitchen contents are correctly valued in case of any accidents in the home.

We would like to re-assure you that we will remain open for business during the second lockdown as the government guidelines states that manufacturing and construction can remain working.

Our showroom is open by appointment only, with only one meeting at a time in order to maintain social distancing.  Please ensure you wear a mask as the Government guidelines. Alternatively, if you do not wish to visit yet, we would encourage you to contact us for a video consultation (see our contact website page) or, if you prefer just a normal phone call, just let us know when is convenient.

Send through your project plans to info@pricekitchens.co.uk for a design and quotation.  Photographs and a rough room sketch together with your “wish list” are sufficient for us to prepare initial proposals.

We will also able to show you products via WhatsApp if you are self-isolating at home. Once you are happy with your design we can meet up to check measurements and finalise colours etc.

Look forward to hearing from you and stay safe.