Mulled drinks… because it’s getting cold out there 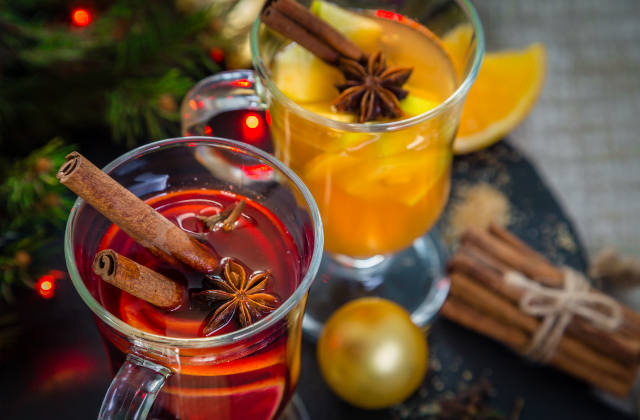 This year, the first hard frost coincided with Bonfire Season. Wrapped up warm in the cold night air, there’s only one thing than can warm you up from inside between now and Christmas.

Whether you prefer a traditional mulled wine, spicy mulled cider or a non-alcoholic version, there’s something very comforting about sipping from a hot mug in the middle of winter.

Luckily, making your own mulled drinks is super easy to do. All you need is a few simple ingredients and a large stainless steel saucepan with a lid and a ladle. Heat it all up on the stove – both gas and induction hobs will work equally well – and enjoy with friends.

Cut one of the oranges into 6 segments and stud each segment with 3 cloves, then set aside. Peel and juice the other orange and place into a large saucepan together with the lemon peel, sugar, cinnamon, nutmeg and 5 cloves. Add enough wine to cover and heat gently, stirring until all the sugar has dissolved. Turn the heat up and boil for 5 minutes so that the mixture reduces to a syrup. Lower the heat and add the rest of the wine and ginger wine. Gently heat up and serve garnished with orange segments.

Stud the orange with the cloves and place into a large saucepan. Pour in the cider, ginger beer, cinnamon and sweetener and cover with a lid. Heat up gently until boiling point is reached, then turn the heat off and add a splash of rum. Pour into a jug or serve straight from the pan.

Place the cinnamon, fruit peel and ginger into a large saucepan and pour in the apple juice. Heat gently and simmer for 10 minutes to allow for the flavours to develop. Stir in the sweetener, then strain the mixture into a jug or straight into mugs to serve while hot.